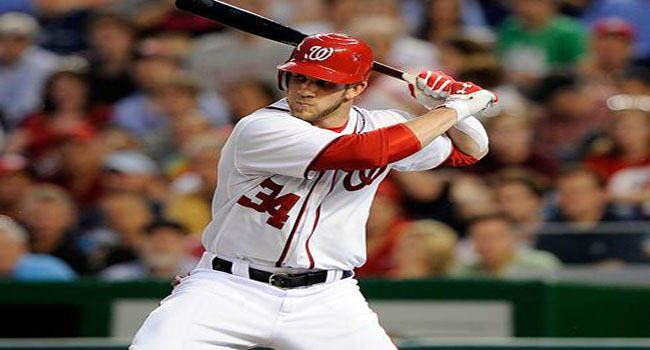 Washington Nationals 13/4 – The addition of Max Scherzer rocketed the Nationals to the top contenders in the National League and rightfully so. He will eat innings which will help the bullpen. The offense is solid, but not spectacular in my opinion but I do like skipper Matt Williams a lot because he knows how to generate some runs.

Los Angeles Dodgers 19/4 – Brandon McCarthy makes the starting rotation deeper but did the bullpen and offense get any better? I think the Dodgers challenge but any dropoff could result in Don Mattingly going bye-bye.

Chicago Cubs 6/1 – Joe Maddon instantly adds wins to this team and adding some more talent to the already talented youth doesn’t hurt either. Can they live up to higher expectations? Time will tell.

San Diego Padres 13/2 – The addition of James Shields will give the pitching staff a much needed boost and the offense will be better as well. The problem is the division where the Giants and Dodgers aren’t going to go away anytime soon.

St. Louis Cardinals 13/2 – Although some extra pitching would have been nice in the offseason, the Cardinals did add Jason Heyward to the outfield and the line-up. I see no reason why the Cards aren’t right where they usually are in the end.

San Francisco Giants 17/2 – The defending champs aren’t fond of odd-numbered years and their pitching staff, outside of Madison Bumgarner is a little questionable. Plus, who replaces Pablo Sandoval?

New York Mets 14/1 – Michael Cuddyer comes over from Colorado so while we can expect his numbers to drop a bit he is still a solid upgrade. There are capable players on this team so if the pitching can come through the Mets could be a challenge in the East.

Pittsburgh Pirates 14/1 – The Battling Buccos have to replace Russell Martin behind the dish and that won’t be easy. He was a great leader and was well-liked by the fans. A.J. Burnett returns to the rotation but will they get enough out of the starters this year?

Miami Marlins 16/1 – This team will have a very exciting outfield which should put butts in seats. The questions will be mostly about pitching and whether the Marlins will have enough of it to stay with the Nationals.

Cincinnati Reds 28/1 – After competing in recent years the Reds will take a significant step back. They lack any real depth and should they stay healthy could be a factor but they dumped too many guys to consider them.

Atlanta Braves 33/1 – The Braves unloaded a lot of players recently and seem to be throwing in the towel for this season and maybe next year as well.

Milwaukee Brewers 33/1 – The Brewmasters started so hot last season but then the roof collapsed and they were caught by St. Louis and Pittsburgh. I don’t see any type of start this year resembling what they did in 2014.

Arizona Diamondbacks 50/1 – This team is destined for the basement in the National League West unless they can best the Rockies which is debatable. The Padres got better and there’s no way they are in the same league as the Dodgers and Giants.

Colorado Rockies 75/1 – The Rockies have very little pitching and the offense is going to rely too heavily on just a couple of guys for them to be taken seriously in 2015.

Philadelphia Phillies 75/1 – It’s a fantastic baseball city that probably deserves better but I don’t see much hope in sight. This is going to be another long year especially in a division with three top, improved teams.

Who I like… As much as I hate going with the favorite, I think Washington gets over the hump behind a monster pitching staff and wins the pennant.