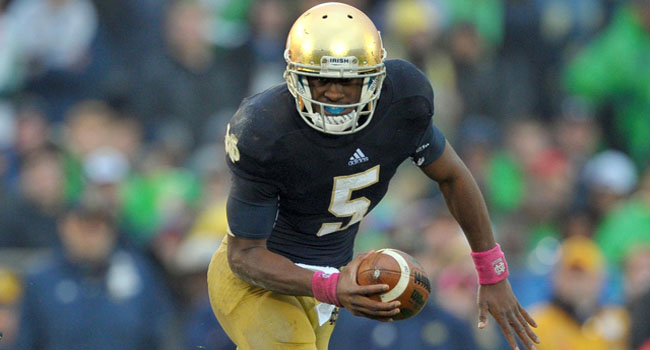 It all started on Thursday night when unranked but unbeaten Arizona traveled to Eugene and knocked off Oregon. If we only knew that was just the beginning of one of the craziest days in recent college football memory.

Top-ranked Florida State had no problem with Wake Forest early in the day on Saturday making us think that maybe this wouldn’t be such an usual day but then the chips started to fall. #7 Texas A&M went to 12th-ranked Mississippi State and lost 48-31 while Ole Miss scored the biggest win of the day in knocking off third-ranked Alabama 23-17.

So take a breath here because the day of craziness was far from over. Soon after Bama went down #4 Oklahoma lost 37-33 to TCU in Fort Worth. So if you’re keeping score at home, teams ranked second, third and fourth in the most recent Coaches Poll had lost. But the day wasn’t over yet.

UCLA, who had been wining by the skin of their teeth before blowing out Arizona State last week, was beaten at home by Utah 30-28. Fellow Pac-12 teams USC (#16) and Stanford (#14) both went down as well.

#10 Michigan State survived Nebraska’s visit to East Lansing winning 27-22 after leading 17-0 at halftime. Big Ten West Division favorite and #17 Wisconsin was beaten in Evanston by Northwestern who now stands at 2-0 in the division.

Also going down in the top 25 last night was #18 BYU who was throttled at home by Utah State.

Obviously someone came out smelling like a rose this weekend and there are a few contenders for that title. Number five Auburn destroyed LSU 41-7 and will likely slide into the #2 spot in the polls. #11 Ole Miss and #12 Mississippi State will both rise into the top ten. Also benefiting from the action Saturday is #7 Baylor who beat Texas 28-7 and #9 Notre Dame who needed a last-second touchdown to beat Stanford in South Bend.

When the format for the college football playoff came out, it was pretty much a given that the SEC would more than likely secure two of the four spots simply because of their strength of schedule and number of teams that would rise especially in the West Division. The problem is that the East Division is not good and unless Georgia can run the table the East won’t put up much of a battle in the SEC title game.

The other problem for the SEC West is that it’s highly unlikely anyone comes out unscathed. Both Ole Miss and Mississippi State were impressive yesterday but they both still have each other to play as well as other top teams in the West.

The SEC could benefit however from all of the losses in the Pac-12 and Oklahoma’s loss too. Now Baylor stands as the only unbeaten in the Big-12 and still has to play at Oklahoma.

The Big Ten’s only hope remains Michigan State. Their only loss is to Oregon but now that loss looks less impressive with the Ducks losing at home. Still, an impressive win over Ohio State along with going unbeaten the rest of the way could squeeze them in to the playoff.

The team that is the most interesting right now is Notre Dame who is unbeaten. The Irish shouldn’t have any trouble with North Carolina in South Bend next week but then has three straight road games at Florida State, Navy and Arizona State. I have a hard time seeing the Irish come out unscathed in that stretch. If they do, it’ll come to down to the finale with USC.

Michigan State – I still think they’ll need some help but they should run the table.

Alabama – I think the Tide will beat Auburn for the West title and then will go on to win the SEC.

Florida State – I omitted them last week because I thought they might slip up at some point but now I just don’t see it happening.

Notre Dame – Even with one loss, their strength of schedule will be better then many other one-loss teams. 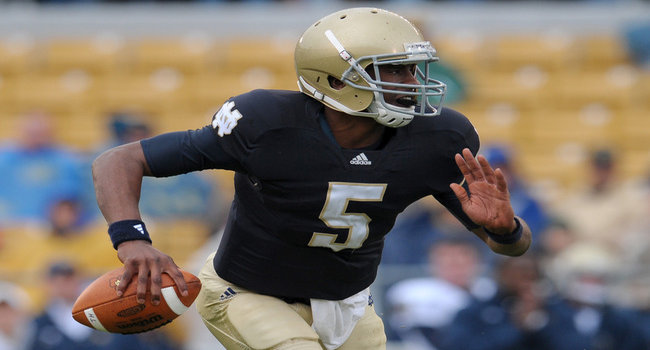 The chances that the University of Notre Dame was going to make a return trip to the BCS National Title Game were slim enough heading into the past week but now the chances have dwindled even further. It was reported and later confirmed by Everett Golson himself that the star quarterback for the Irish had indeed been suspended and will not play in 2013.

The official announcement from both Notre Dame and Golson is that he is no longer enrolled at the University. The official reason is “poor academic judgment.” Let’s be really honest here shall we? Do any of us really believe that’s what this is really about? Notre Dame and every other major college football program will do anything and everything to make sure their respective players are eligible with very few exceptions.

I’m not suggesting the Golson was involved in anything criminal, but I am hinting at the possibility that this is much larger than just failing a class or two. Starting QBs at the top schools in America are not “ineligible” everyday ya know and I smell something far greater than what is being offered. Believe me, I hope I’m wrong but something just isn’t right here.

The Las Vegas Hotel and Casino SportsBook almost immediately dropped the Irish from 30-1 all the way to 50-1 and we are still 100 days or so from the start of the 2013 college football season. Certainly sports books like this one will alter those odds as the season approaches and a lot of that will depend on who Head Coach Brian Kelly goes with as his signal-caller. 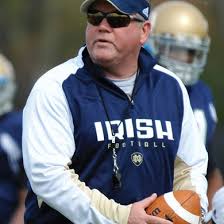 Kelly has few solid options as he looks to replace Golson.

Kelly has a couple of different options and is sure to play the decision as close to his vest as possible heading into the season. The options right now for Kelly aren’t all that enticing but do offer him some different skill sets and experience with each.

The odds-on-favorite right now would have to be senior Tommy Rees who has started 18 career games but has often been in and out of Kelly’s doghouse. Behind him would be fourth-year junior Andrew Hendrix and then Spring enrollee Malik Zaire. Hendrix has career numbers of 23 of 44 for 304 yards with a touchdown and two interceptions.

In Rees’ career, he has thrown for over 4,400 yards and has 34 touchdown passes to 24 interceptions. I have to believe he will be the starter for the August 31st opener against Temple in Notre Dame Stadium but stranger things have certainly happened. In terms of what Zaire brings to the table, he’s a much more athletic guy than Rees and is a true dual-threat QB although he is all that fast. His forty time is clocked at just under five flat.

The question with Zaire is does Kelly burn his redshirt that he had planned to use on the youngster this year? Notre Dame was the thirteenth most bet on team so far in terms of winning the national title this year which tells us a lot of people felt like they still had a lot of talent around them despite losing Tyler Eifert, Manti T’eo and company.

There is one long-term option in Wes Lunt, a QB looking to transfer from Oklahoma State. He listed Notre Dame as a potential landing spot, but would not be eligible until next season.

Regardless of the direction Brian Kelly chooses to go, Notre Dame will still be a good football team in 2013. Will they be in the hunt for the National Title? I say “no” and I really never felt they were anywhere due to the losses I mentioned as well as those on the offensive line. Not a good day to be an Irish fan that’s for sure.