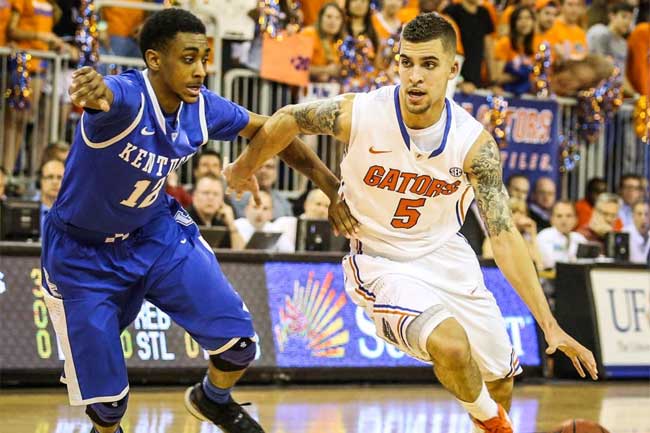 Florida is the new favorite to win the NCAA tournament in March.

The SEC side picked up home wins over Mississippi and #25 Kentucky over the last seven days which – combined with some high-profile losses elsewhere in college basketball – was enough to secure the bookmakers’ top spot.

Odds of the Gators winning the tournament stand at 5/1.

This marks the first time this season that #7 Florida (20-3, 10-1 SEC) has been considered the favorite.

Billy Donovan’s side will look to continue its strong run – which includes 12 wins in 13 games – this weekend with a trip to Auburn (9-15, 3-8 SEC) on Saturday.

The Bloomington side is currently edging out #8 Michigan State (21-4, 10-2 Big Ten) in the Big Ten standings by way of a 75-70 win back on Jan. 27. The two sides meet again in East Lansing next Tuesday, right in time for next week’s futures list. The Spartans are currently considered 12/1 to win the tournament, making the side seventh on the bookmakers’ list.

Three losses in four games has #4 Michigan (21-7, 8-4 Big Ten) reeling. Despite the Wolverines coming up short against Indiana, Wisconsin, and Michigan State (all on the road), bookmakers aren’t about to bail on the team just yet.

Odds of Michigan winning the tournament currently stand at 7/1, third on the futures list.

The Wolverines have a good shot at bouncing back this weekend; the side welcomes Penn State (8-15, 0-11 Big Ten) – a side still in search of its first conference win – to Ann Arbor on Sunday.

Losses to North Carolina State and Miami still appear to be foremost in the bookies’ minds as far as #2 Duke (22-2, 9-2 ACC) is concerned.

The Blue Devils had won five straight following that loss to the Hurricanes when this week’s futures list was released, but odds makers list the Durham side as 17/2 to win the tournament.

Wednesday night’s win over North Carolina gives Duke some bragging rights but it will take an additional win on the road in Maryland (17-7, 5-6 ACC) to further impress the bookmakers.

The futures top five is rounded out by this season’s surprise package, #3 Miami (20-3, 11-0 ACC). Odds of the Hurricanes winning the tournament currently stand at 9/1.

Unbeaten in conference play, Miami continued its success with wins over Boston College and North Carolina last week, to advance to #3 in the AP poll and #5 on the bookies’ list. The side scored a win at Florida State on Wednesday night to further stake a claim to being the best team in college basketball. A win over Clemson (12-11, 4-7 ACC) on Sunday would go even further to impressing everybody.

Elsewhere, #25 Kentucky (17-7, 8-3 SEC) continues to slip down the list. Two weeks ago the Wildcats were considered 25/1 to win the title. Now the side from Lexington is considered 40/1, and that’s before you factor in Nerlen Noel’s season-ending injury.

North Carolina (16-8, 6-5 ACC) is another high-profile casualty. The inconsistent Tar Heels’ odds dropped to 60/1 (down from 40/1 two weeks ago) and Wednesday night’s loss to Duke isn’t about to help matter.

#15 Georgetown (18-4, 8-3 Big East) is also trending upwards. With six straight wins – including three over opponents ranked in the AP top 25 – the Hoyas have moved into a virtual tie with #6 Syracuse (20-4, 8-3 Big East) atop the Big East. Bookmakers have slashed the team’s odds from 75/1 to 50/1. Wins over Cincinnati and DePaul this week would see those odds drop further.

All odds supplied by Bovada. 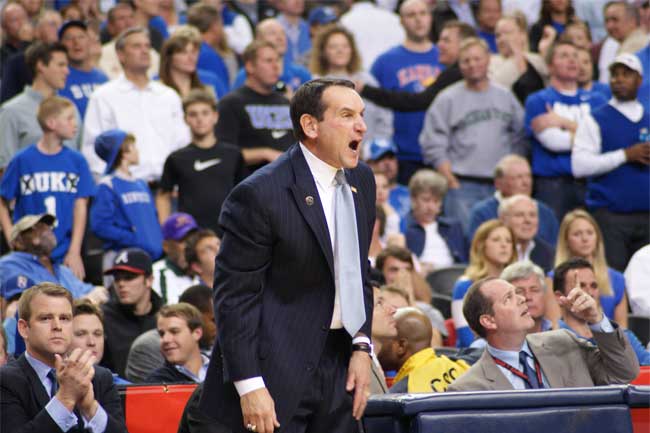 Despite suffering an 84-76 defeat at the hands of North Carolina State on Saturday, Duke remains the bookmakers’ choice to win the 2013 NCAA Men’s Basketball tournament.

Currently ranked No. 3 by the Associated Press, Duke (15-1, 2-1 ACC) has been given 11/2 odds of winning the tournament, keeping the side ahead of the victorious NC State (14-3, 3-1 ACC), considered 18/1 to successfully navigate March Madness, a figure good enough for joint eighth on the NCAAB Futures.

Mike Krzyzewski’s side returns home to Cameron Indoor Stadium in Durham, N.C., on Thursday night to host a Georgia Tech Yellow Jackets (10-5, 0-3 ACC) side still looking for its first ACC win of the season.

Odds makers have Indiana – ranked No. 2 in this week’s AP polls – nipping at the heels of the Blue Devils. Odds of the Hoosiers (15-2, 3-1 Big Ten) winning the tournament stand at 6/1, although Tuesday night’s home loss to Wisconsin could change a lot of opinion regarding the Bloomington side come this time next week.

Indiana is one of six Big Ten sides to feature in bookmakers’ top 25 list this week, making the conference the most represented in the list. The Big East is a close second with five sides represented.

The first of those Big East representatives is Louisville (16-1, 4-0 Big East). The Cardinals secured a No. 1 AP ranking this week following losses for Duke, Michigan, and Arizona, and are now considered third favorite to win the NCAA tournament.

Odds of Louisville winning it all currently stand at 8/1. The Cardinals host a huge game this Saturday as Syracuse (16-1, 4-0 Big East) makes the trip southwest to the ‘Ville.

The sixth-ranked Orange currently ranks behind Louisville in the Big East standings, AP polls, and NCAAB Futures, with odds of 14/1 – sixth on the list – to win the tournament. This game could have huge implications in all of those categories.

Sunday’s result also saw the Buckeyes stake a claim for being a contender in the Big Ten. Ohio State has been assigned 18/1 odds of winning March Madness. That figure is identical to that given to Arizona (15-1, 3-1 Pac-12). The Wildcats – the highest rated Pac-12 side – bounced back from last week’s loss to Oregon with a win over Oregon State on Saturday.