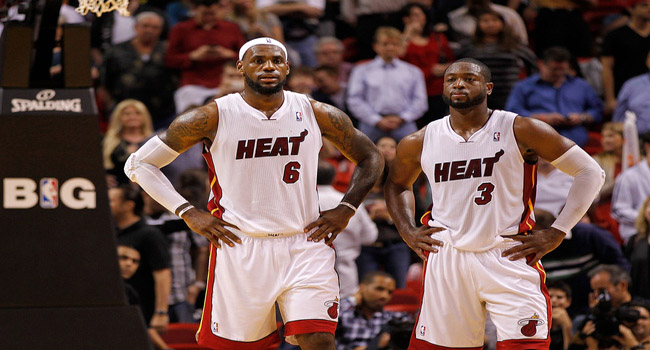 Here is what is going to give tonight in game six of the Eastern Conference Finals; Miami is 9-0 at home in series clinching games during the days of LeBron James, Dwyane Wade and Chris Bosh. Meanwhile the Pacers are 3-0 in road elimination games so far in this year’s playoffs.

Which way do I see this game going tonight? Read on…

Indiana at Miami (-7), Heat Leads Series 3-2 – If you noticed the somewhat laid-back attitude of LeBron James and Dwyane Wade in the postgame press conference it was likely due to the fact that James had his worst playoff game as a professional yet the Heat still had a chance to defeat the Pacers on their homecourt.

James scored just seven points and played only 22 minutes as he spent much of the in foul trouble. His Miami teams are 0-9 when he scores under 15 points so we shouldn’t be surprised by the outcome.

It was obvious to me that the officiating changed drastically from game four to game five. Of James’ five fouls I would say only one was a legitimate foul. The rest were highly questionable. The “noise” among NBA fans in these situations always banks on conspiracy.

The league obviously wants the Heat in the finals for overwhelmingly logical reasons. This theory is blown out the window if Chris Bosh’s three-pointer connects or does it? Miami would have still gone to the Finals which make the television people happier than pig in slop.

All the loss to Indiana does in the league’s eyes is delay the inevitable. If that’s the way one thinks anyway…Besides the struggles of James, the other story was Paul George who followed his coach’s advice and stayed “green.” George was 15 for 28 for 37 points in game five and essentially willed his team to victory with clutch shots. He has to continue doing this if they are to have any chance at making the comeback in this series.

Roy Hibbert is far too inconsistent to rely on and scoring from anyone else is not steady either. George just needs to keep shooting or in the words of George Costanza, “be a chucker.”

The Heat have to be confident coming home after playing as poorly as they possibly could have yet they nearly won the game. It’s almost the closest thing to a sure thing to pencil in 25 points, seven boards and five assists for James if not more. I expect Wade to be better and don’t be surprised if ‘Birdman’ Andersen returns following a two-game absence.

As you know, I’ve been pretty awful in this series. Each time I think one thing the other happens and yet I’m not giving up. The numbers just don’t add up to anything positive for Indiana. The Heat just don’t lose games in this situation and they aren’t going to this evening either. The trends point to the OVER and I really like Miami to cover as well.

The Heat will enjoy a little extra rest time as the Spurs and Thunder duke it out in the Western Conference.