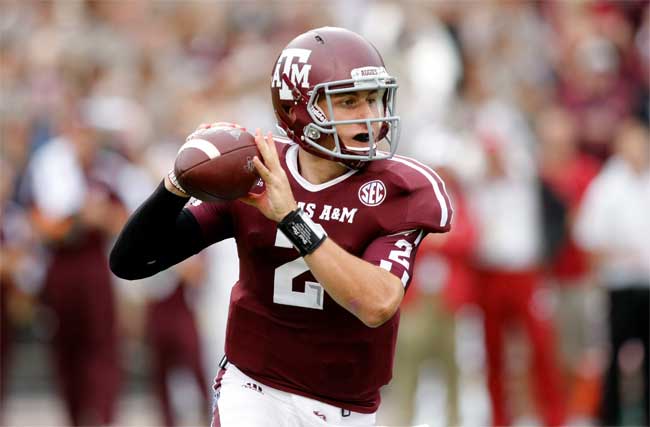 It feels like just yesterday we were preparing for Alabama’s showdown with Michigan at Cowboys Stadium, but believe it or not, it’s only a few short weeks until we reach championship and Bowl season.

A number of big games take place this week that could decide, or at least go a long way to deciding, who represents the various conferences at their respective championship games. There’re also a few games that might have some influence on the National Championship picture.

While Oregon heads to California, Notre Dame challenges Boston College and Kansas State takes on TCU – all games that should go with the formbook – let’s take a look at this weekend’s ranked matchups and see how they might impact the final standings.

Before we get into the nitty-gritty, let’s set a scenario. If Alabama was to close out the season with losses to both A&M and Auburn, and the Aggies knocked off Mizzou in the last week of the regular season, Texas A&M would head to Atlanta for the SEC Championship Game. How would that be for an SEC debut?

Now, before we get ahead of ourselves, nobody believes that Alabama is going to lose one game, let alone two, but, whilst there’s a possibility, maybe it’s worth a gamble?

The clash on Saturday will mark only the fourth encounter between the two sides, the last one coming in 1988. Alabama won that game and is 3-1 overall. Alabama had a tough outing against LSU last week, and showed for the first time that it may well be beatable. It’s up to Johnny Manziel and the Aggies to try and prove that the Tide is beatable.

Odds: Alabama opened as 15½-point favorites but that number has fallen to 14 ahead of kickoff. The over/under is 56.

Take: Alabama – Aside from slipups to Florida and LSU, Texas A&M has looked good this season, just not good enough to head Alabama off at the pass. The best the Aggies can hope for is to cover the spread, which is a good bet. Take the under on 56 points; both teams will be relying on defense on Saturday.

Oregon has all but been awarded the Pac-12 North title, and a place in the BCS Championship game, but in reality, were the Ducks to slip up, it’s possible that either the Cardinal or the Beavers could leapfrog the team from Eugene.

The team that stands a chance of doing just that will be decided this weekend at the Farm. Neither team will be mathematically eliminated this weekend, but the winner looks likely to have the best advantage heading into the final two weeks of the season.

Stanford convincingly leads the all-time head-to-head 50-25-3 and has won two on the bounce. However, Oregon State has won seven of the last 11.

Odds: Stanford is favored at home but an opening 5½ spread has fallen to four. The over/under is 45.

Take: Oregon State – This is a perfect opportunity to take the underdog. The Beavers have looked solid all season, while Stanford has had a few questionable moments. A win for Oregon State sets up a Civil War game for the North title. Take the over.

Remember in the preseason when pundits and bookies had USC to win it all? Things haven’t exactly panned out that way, have they?

This weekend, Arizona State travels to Los Angeles knowing that a win will leapfrog the Sun Devils over the Trojans into second place in the Pac-12 South or, even better, first if UCLA loses to WASU later in the day.

USC meanwhile will be looking to right an unsteady ship and begin a charge to the title, thus making amends for a disappointing season. A win on Saturday, coupled with a UCLA loss would put the Trojans at the top of the table. Even if UCLA defeats the Cougars, a showdown with USC lies in wait next weekend.

USC is 18-10 all-time against Arizona State. However, the Trojans has an 11-game win streak shattered last season when the Sun Devils took a 43-22 victory in the desert. Arizona State has not won at the Coliseum since 1999.

Odds: USC opened as 10-point favorites, but action has seen the spread drop to nine. The over/under is 65.

Thursday night’s 17-13 loss to Washington has cast a cloud over not only #8 Stanford and its chances of being selected to play in the BCS National Championship Game, but also the Pac-12’s chances as a conference.

For a conference that was considered the only viable competition to the dominant SEC ahead of the season, things are looking less than clear now.

Just two weeks ago, the Cardinal upset USC, denting the Trojans’ own chances of going to the Championship Game. In the process, Stanford staked a claim to be the team that would head to Miami Gardens in January. Admittedly, it was a loose claim. Stanford after all struggled to beat San Jose State in Week 1.

Ahead of Week 4, UCLA looked to be putting their names forward for consideration, but a loss to Oregon State suggested that it’s a little too early to consider the Bruins as serious contenders.

Oregon State meanwhile has gone 2-0 with two wins over ranked opposition. Not a bad start. But can the Beavers keep that pace up? Probably not, although oddsmakers have slashed odds of a BCS championship from 500/1 in the preseason to 75/1 this week.

So that leaves Oregon. Having been considered second fiddle to USC during all of the preseason, the Ducks are now considered the Pac-12’s best chance for a national title. Preseason odds of 10/1 have steadily shortened to 13/2 heading into this week’s action.

The Ducks have looked solid so far this season, averaging close to 53 points per game. But critics could argue that Oregon has yet to play anybody of merit. Sure, they defeated Arizona 49-0 last week, but Arizona’s inclusion on the AP poll was less than solidified. Had the likes of Wisconsin, Michigan and Nebraska played better this season, it’s hard to imagine the Wildcats appearing on that list.

For Oregon, the big challenge comes on November 3, with a visit to USC. That is of course if the Ducks can get by Washington next week. A loss to the Cougars would effectively write off National Championship hopes this year.

After Washington’s upset win over Stanford, here’s what else is on tap this Saturday. Both USC and Utah are on a bye week.

The Sun Devils will be looking to continue their strong start to the season with a win over a struggling Golden Bears team. Arizona State currently leads the South division by way of USC’s loss to Stanford and Arizona’s loss to Oregon. Still, the team opened as underdogs in this one, before odds flipped in their favor. The Sun Devils are currently narrow favorites (-1) with the over/under set at 58. There’s certainly money to be made on this game.

A loss to Oregon State last week saw UCLA’s two week tenure in the AP Polls come to an end. A win against Colorado this week could, but probably won’t, see the Bruins return to the rankings. UCLA enters the game as favorites (-21) and are expected to make easy work of a Colorado team that has looked poor this season. Only a 35-34 win over Washington State last week prevented the Buffaloes from starting the season 0-4. The over/under is 60, with UCLA expecting to accumulate most of those points.

Arizona enjoyed two weeks in the AP Poll before losing big to Oregon last week. Oregon State may have only played two, but the Beavers have knocked off two ranked teams (Wisconsin, UCLA) and is sitting pretty heading into this game.

Oddsmakers have the Wildcats as favorites (-3) heading into this one, so they’ve yet to be bowled over by the Beavers’ performances. This games figures to be a close one. The over/under is 61. A win for Arizona will see the Wildcats flirting with the AP poll once again. A win for Oregon State will cement the team’s AP approved credentials.

Whether Oregon remains the Pac-12’s last remaining hope against the dominance of the SEC remains to be seen. This week the Ducks head out on the road for the first time. Despite the travel north, Oregon are big favorites (-32) over the Cougars. The over/under is 74. Oddsmakers are expecting this to be a high-scoring one-sided affair, just like Oregon’s previous four.