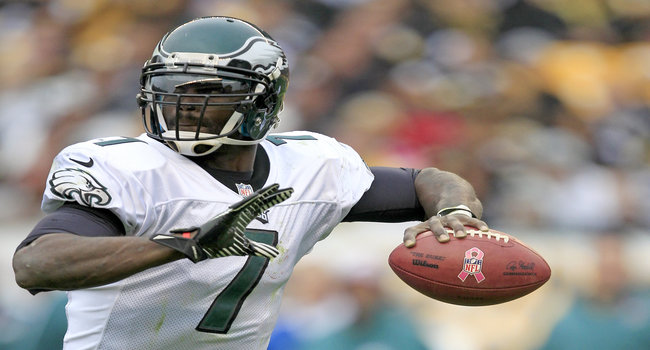 The opening Sunday of the first week of the National Football League’s 2013 season is in the books and while I wasn’t perfect by any means in my four picks I was respectable. As has been the case in recent years, the NFL is offering a double-header of pro football action on the first Monday night of the season.

Both games should be entertaining but I think you’ll find the opener a little more competitive. Either way, let’s look both games.

Philadelphia (+3.5) at Washington – Perhaps this stat out of the gate right away might throw some caution your way but maybe not. The Eagles are 2-9 in their last 11 games against the spread. The Redskins are 2-4 ATS in their last six games at home against Philly. There’s a lot to consider in this game however that really doesn’t have a bearing on those past numbers.

Robert Griffin III will be taking the field for the first time this season following offseason ACL surgery. He was cleared to play in the preseason but Head Coach Mike Shanahan decided against playing him. That begs the question; how rusty will he be as he sees real action for the first time since the playoffs last season?

From the Eagles’ perspective, they have undergone a serious change too. New Head Coach Chip Kelly comes in ready to unveil his high-speed no-huddle offense that we just know has to be coming. Very little if any was seen during the preseason but I have to believe its coming tonight. Is Michael Vick the guy to run this offense? I believe he is but he must take better care of the ball than he did last season and that doesn’t matter regardless of what offense you’re running.

To me, this game falls on the shoulders of Alfred Morris and the Washington defense. Look for Shanahan to give Morris lots of carries while the improved Redskins’ pass rush must fluster Vick and create turnovers. I will take Washington and give the points.

Houston (-4.5) at San Diego – Something will need to give in the nightcap of the MNF doubleheader. Houston is 1-4 ATS in their five road games while the Chargers are 1-6 ATS in their last seven games at home.

Expectations are not high in Southern California despite new Head Coach Mike McCoy taking over for Norv Turner. The offensive line is one of the weaker in the NFL and QB Philip Rivers has already lost his big-play threat in Danario Alexander who is out for the year with a knee injury. Running back Ryan Mathews has shown promise but has been stifled by injury.

The Texans enter the opener with hopes of reaching the Super Bowl after falling in the divisional playoffs last year. You sure could argue everything is in place for such a run. The defense one of the top units in the league and there are plenty of weapons offensively. So where’s the doubt in this team? It’s at quarterback where Matt Schaub’s play will dictate just how far this team goes.

Schuab has big-play guys at both tight end and wide receiver but he must come up big when the team needs him and that isn’t something he has been able to do in recent years. If Arian Foster is able to go, he also provides major help to Schaub in the running and pass catching departments.

I think you’ll see a close game in the first half in San Diego but I like the Texans to pull away in the second half and cover. 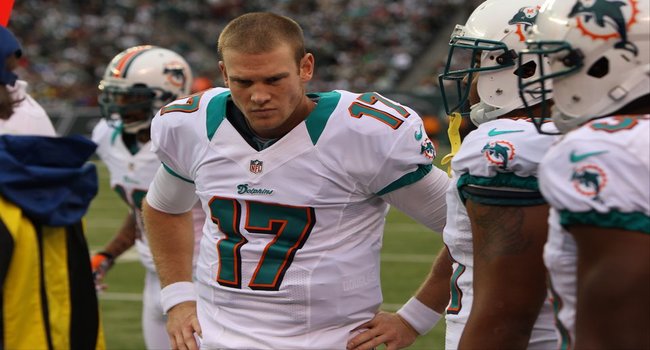 It’s once again time to take a look at the National Football League. With training camps ready to open up in about three weeks, all 32 teams have their sights firmly set on Super Bowl XLVIII. This year’s big game will of course be played in MetLife Stadium in New York, errrrrrr, New Jersey and if you’re like me, you’re hoping for an epic blizzard.

Regardless, it’s time to analyze the AFC today. Current projections are from our friends over at Bovada. The opinions on whether teams go over or under are strictly mine of course.

Buffalo Bills 6.5 (+110 over/-140 under) The Bills play the NFC South and AFC North this season which will be daunting. Despite improvements to the QB position, I like the under.

Miami Dolphins 8 (Even over/130 under) Nobody upgraded as well as the Dolphins did through free agency but their success still lies with QB Ryan Tannehill. I like the Fins to get to nine wins this season.

New England 11 (+105 over/-135 under) We have to ask ourselves just how much the Aaron Hernandez issue will haunt this team. I don’t think it does and the defense is better but I still like the under with the crossover divisions they have.

New York 6.5 (+110 over/-140 under) Mark Sanchez? Geno Smith? Does it really matter? There isn’t a whole lot of talent around these guys anyway. Have to go with the under here as Rex exits.

Baltimore 8.5 (-135 over/+105 under) No defending Super Bowl Champ lost more starters heading into the next season than the Ravens. With that, was a lot of leadership as well. I will take the over but just barely as they get to 9-7.

Cleveland 6 (+135 over/-105 under) Call me absolutely crazy but I think Norv Turner running this offense will compliment a good defense and get the Browns to over six wins in 2013.

Cincinnati 8.5 (-140 over/+110 under) Andy Dalton has to produce in big moments because to this point he hasn’t. The talent is there on both sides of the ball so I will take the over here.

Pittsburgh 9 (-125 over/-105 under) Assuming the young offensive line stays healthy and Ben Roethlisberger can avoid major injuries, they can thrive with a new rushing attack behind Le’Veon Bell. I’ll take the over but this assumes they can be somewhat healthy.

Houston 10.5 (Even over/-130 under) The Texans will make the playoffs again but they have the AFC West and NFC West in divisional crossovers. The last part worries me. I like the under as the Texans go 10-6.

Indianapolis 8.5 (-120 over/-110 under) Will the sophomore slump affect Andrew Luck? I don’t think so and I like the pieces they have around him. The problem? Bruce Arians is gone and I think that will impact the offense negatively. I like the under in Indy.

Jacksonville 5 (-115 over/-115 under) In the first six of weeks of the season, the Jags have road games at St. Louis, at Oakland, at Seattle and at Denver. Ya, I’ll take the under here.

Tennessee 6.5 (-105 over/-125 under) I really think this will be a team that builds on some positive things from last year and will sneak up on some teams. If Jake Locker can be healthy, I love the over here.

Denver 11.5 (-110 over/-120 under) The Broncos’ schedule is what concerns me. They get the NFC East and AFC South plus they have five of their last eight games away from home. They’ll win the west, but I like the under.

Kansas City 7.5 (-105 over/-125 under) Andy Reid will improve this team dramatically and so will Alex Smith. The question is whether Reid can stick with talented running backs and not get pass-happy as he did in Philly. I like the under.

Oakland 5.5 (+110 over/-140 under) When you’re paying over $40 million to guys who aren’t even on your roster, that’s a major issue. Oakland will give teams fits this year because they always play tough but I like the under.

San Diego 7.5 (Even over/-130 under) Life without Norv Turner begins for Philip Rivers. This is good news because Ken Whisenhunt is a proven winner at the offensive coordinator position. The running game and defense concern me though. I’ll take the under just barely. 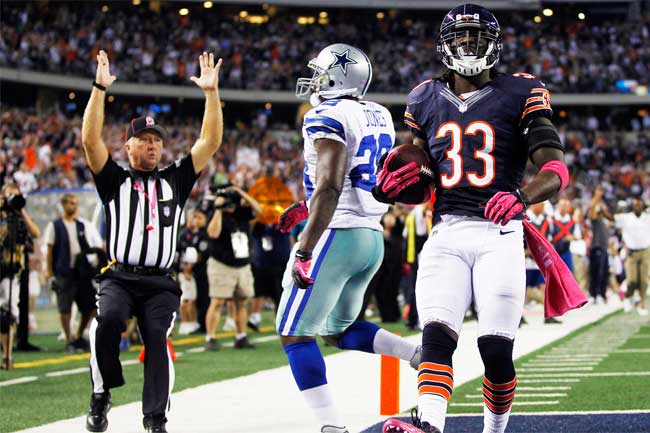 Week 10 in the NFL is accompanied by a slew of match-ups that will have a big-game feel to them and a whole host of postseason implications resting on them. Here’s a look at the big three, if you will, and how they are likely to pan out come the end of Sunday’s slate.

Until the Falcons beat a quality opponent, their unbeaten record will come with an asterisk. Unfortunately for the Falcons, as it stands, only one team (NY Giants) is left on the schedule with a winning record. That being said, four division games remain, each of which will pose a tough threat.

New Orleans is looking for win for the fourth time in five games, a statistic that would certainly suggest the Saints are finally righting the ship. That makes New Orleans a dangerous team this weekend.

Both teams have excelled at passing the football this season, so expect more of the same. However, both sides are porous when it comes to defending the rush, so were one to take advantage of the running game – as New Orleans dis last week against Philadelphia – sufficient progress could be made.

Odds: Atlanta has become a three-point favorite after the spread opened at evens. The over/under is 54, up one-half point on opening.

Take: New Orleans – Can you ever remember an undefeated team this late in the season that wasn’t favored over a team with a 3-5 record? That’s how this one opened, and although Atlanta is a narrow favorite now, New Orleans is worth the gamble, particularly as the side has won 10 of the last 12 meetings. There’s little chance that this will be anything but a tight finish though. Take the total to go over; both teams rank in the top eight in the league in scoring.

These two long-term rivals are both desperately in need of a win if they’re to catch the Giants in the NFC East or book a Wild Card spot in the playoffs. Both coaches may well be on the hot seat also, as the teams have underachieved.

For Dallas the major problem has been turnovers. For Philadelphia, consistent play calling and protecting the quarterback have turned a promising start into a miserable season.

Dallas leads the all-time head-to-head 59-47 but Philadelphia has won three of the last four including two straight.

Odds: After opening as two-point favorites, the Eagles are now two-point underdogs. The over/under is 44½, one point lower that at opening.

Take: Dallas – Philadelphia hasn’t won three straight against the Cowboys since 2004, and won’t buck that trend this weekend. The lack in face of bookmakers, who have adjusted the favorite in this one, is just. The Eagles are 1-6-1 ATS this season, so take the Cowboys to cover the spread. Take the under; 10 games involving the Cowboys and Eagles have seen the total go under.

And finally, the biggest game of the weekend, and perhaps the season so far.

Chicago has gotten a lot of offensive assistance from its defense this season. The Bears’ have returned seven interceptions for touchdowns and forced 28 turnovers in total. Charles Tillman forced four fumbles by himself last week against Tennessee. But Houston will not be as easy a mark as the Titans.

The Texans have turned the ball over just six times this season, complimenting what is one of, if not the most balanced team in the league. The side ranks fourth in scoring and third in opponents’ scoring. Believe it or not, the Texans defense, which ranks fourth and second in pass and rush defense, is better on paper than the Bears.

Odds: Chicago is one-point favorites after the spread opened even. The over/under has dropped from 43 to 40.

Take: Chicago – Homefield advantage may be the only factor separating these two sides so it’s worth taking the Bears to win a very close one. With the spread at one point, the Bears will cover. This one has all the markings of an epic defensive struggle, so take the total to go under.